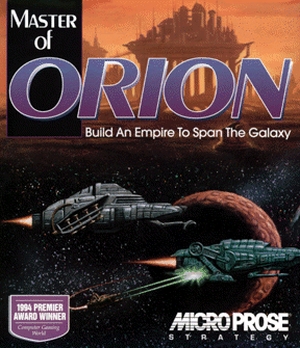 Master of Orion is a turn-based 4X (eXplore, eXpand, eXploit, eXterminate) strategy game set in space. Players select a race and make decisions that would spell either the supremacy of their race or its destruction. They are not alone in the vast ocean of space, with other races controlled by the AI (or other players) attempting to do the same.

And throughout the galaxy, there are worlds filled with the Lost Technology left behind by the Precursors. Legend still speaks of the lost capital of their empire, Orion itself, filled with technological treasure for the taking of whoever can defeat its Guardian...

The game is famous for its ship designing feature, where everything from the hull to the components available are taken from the research decisions that the player makes, which is dependent on the selected race's bent toward a particular mindset, and thus technological focus.

Victory is achieved by winning a popularity contest, or by conquering the galaxy. The second and third games feature a third winning condition.

By default, the entries below refer to Master of Orion II, easily the most popular of the series nowadays; though many of them apply to one or both of the other games as well.

Tropes used in Master of Orion include:
Retrieved from "https://allthetropes.org/w/index.php?title=Master_of_Orion&oldid=1562996"
Categories:
Cookies help us deliver our services. By using our services, you agree to our use of cookies.