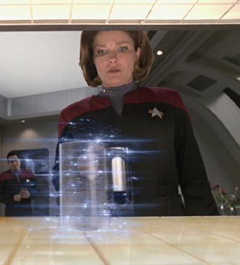 Captain Janeway will always get her coffee.

"Make sure the replicators provide every person with a blanket and food before nightfall."
—Captain Jean Luc Picard, Star Trek.

Matter also operates under certain rules that say that things (barring certain radioactive elements) don't spontaneously transform from one thing to another. If you've ever worried about spontaneously transforming into a giant pile of cherry ice cream while sitting at your keyboard, relax: the odds of such an event happening are vanishingly slim, as are the odds of your keyboard transforming into a nest of live pythons or the ceiling over your head turning into cheddar cheese and falling on you.

Those of us who like to sleep at night find security in those rules. Those of us who want to build things faster find them a nuisance. Turning an ore-rich mountainside into next year's model of automobile or a tree farm into enough copies of Time magazine to fill everyone's subscriptions takes a lot of time and energy; wouldn't it be better if you could just take a big pile of stuff, break it down into the very building blocks of matter and reconstruct it into all those wonderful big complex things?

Works of Speculative Fiction like to take that "if" and make it a reality. Enter the Matter Replicator, a form of Applied Phlebotinum that gleefully ignores the laws of thermodynamics as it reassembles matter to do everything from fixing a radio to fixing a nice cup of Earl Grey.

Note that the name "Matter Replicator" is itself somewhat misleading; it's rare to find one that can actually make something out of nothing (the one law of thermodynamics that usually can't be broken without breaking Willing Suspension of Disbelief as well). A Matter Replicator uses pre-existing matter to replicate something else, or perhaps even construct something entirely new. Creations made of Hard Light need not apply here. But Nanomachines often do.

Examples of Matter Replicator include: