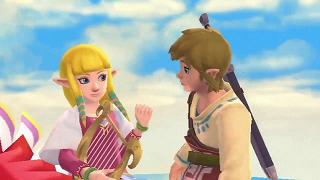 Just Friends or something more? You make the call!

Normally, it's easy to recognize when a romance arc ends with a Relationship Upgrade or an outright Happily Ever After. The tale may end with True Love's Kiss, romantic Holding Hands, an embrace, a mutual Love Confession or proposal, or even a wedding. Babies Ever After may ensue, particularly in the credits.

But what about those romance plots that end on an ambiguous note? What if both parties seem interested, and there's no definitive "no," but there's no kiss, no embrace, and no wedding? This can occur when a story ends with the tentative start of a new relationship, rather than with the culmination of the relationship. In some cases, separated characters are reunited, or a quarrel between two romantically interested characters is resolved, but it isn't entirely certain where the relationship is going to go. Instead of a "yes" or "no" answer to Will They or Won't They? we get "probably" or "kinda sorta maybe."

Unlike some other forms of No Romantic Resolution, a Maybe Ever After ending hints at or implies a successful conclusion to a romance arc. However, the degree of resolution can vary widely. At one extreme, a Maybe Ever After ending can strongly imply that the characters in question are entering into a long-term relationship, coming just short of explicitly indicating that. At the opposite extreme, there may be just a hint of something romantic developing between the characters. That said, when adding examples, don't forget that there must be a reasonable likelihood that the characters in question would end up together. Wishful thinking doesn't count: if you can't point to specific evidence of a potential romantic relationship, leave it out. Likewise, there must be at least some degree of ambiguity about the status of the relationship: if the ending leaves absolutely no doubt about the fact that the two characters are a long-term item now, the example belongs in Relationship Upgrade, Last-Minute Hookup, Happily Ever After, or They Do rather than this trope.

This is a common ending trope in anime adaptations of manga, where it may manifest as an alternative to a Gecko Ending. In Western literature, it may function as part of a Sequel Hook. Maybe Ever After is the subtrope of No Romantic Resolution, which may offer less resolution or may otherwise lack the hint-of-a-positive-ending that characterizes Maybe Ever After.

If your example involves secondary characters whose relationship involves little or no romance arc to speak of, it might be a case of Hooked Up Afterwards. See also Belated Happy Ending, where a sequel clears up the ambiguity of a Maybe Ever After, as well as Downtime Downgrade, where the resolution gets unraveled in between the first work and the sequel. Contrast with Did Not Get the Girl, which may lead to a Bittersweet Ending.

Examples of Maybe Ever After include:

Retrieved from "https://allthetropes.org/w/index.php?title=Maybe_Ever_After&oldid=1682173"
Categories:
Cookies help us deliver our services. By using our services, you agree to our use of cookies.