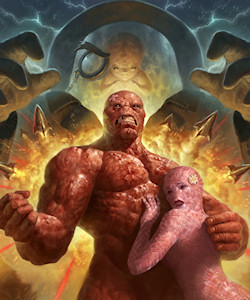 Meat Boy is a flash game created by "Team Meat" (which includes Edmund McMillen) and released on Newgrounds on October 10, 2008.

Meat Boy is a game about pain. It is a game about understanding pain in its purest, most unadulterated form, forcing you to go into a fit of madness. It's also an affectionate callback to all of the controller-destroyingly difficult games of the late eighties and early nineties, and all of the clichés that go along with them, but at least here the levels are (usually) short and the lives (usually) infinite.

You play as Meat Boy, a skinless boy, trying to save his girlfriend made of gauze, Bandage Girl, from the clutches of Dr. Fetus, a nefarious prenatal being in a jar that just so happens to have a PhD. It's not exactly the most original plot ever conceived, but the game's still very imaginative. And painful, as Meat Boy must traverse though worlds filled with buzzsaws, syringes, lava, buzzsaws, salt, homing missiles, and buzzsaws. Did we mention buzzsaws? Cause, yeah, there's a lot of them. We mentioned pain too, right?

A map pack was later released on December 8, 2008. A sequel, Super Meat Boy, was released on Xbox Live Arcade and PC in Fall and Winter of 2010.

Both Meat Boy and Super Meat Boy contain examples of:
Retrieved from "https://allthetropes.org/w/index.php?title=Meat_Boy&oldid=1871146"
Categories:
Cookies help us deliver our services. By using our services, you agree to our use of cookies.