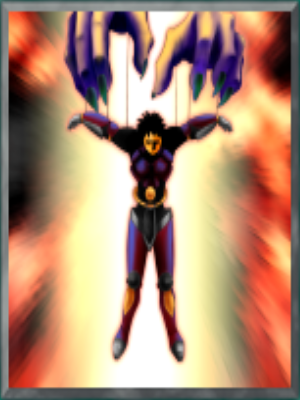 "I'm not too fond of getting my hands dirty; instead, I take over the minds of others. They do everything I say, like good little puppets."
—Jov Leonov, Psi Ops the Mindgate Conspiracy

Not to be confused with People Puppets, a Meat Puppet is a biological and (usually) living Host that has been taken control over by a Puppeteer Parasite, Body Snatcher or similar character, be it through science or occultic sorcery. The attempt to control a potential Meat Puppet in such a manner either results in Body Control, Mind Control or Demonic Possession. Compare to Empty Shell.

The purpose of a Meat Puppet is usually to act as a tool for the controller, ranging from basic slaves to intricately placed spies, sometimes also being used as a "Seeing Eye Dog" if the controller can remotely view through the puppet's senses. Generally, a Meat Puppet is a Faceless Goon, used as a Meat Shield or simple becomes a brainwashed Mook that's expendable to a villain or antihero in control of it.

The following are special types of Meat Puppets chosen for specific purposes:

An entirely alternate meaning refers to The Internet and New Media culture in social media: an online "entourage" or crowd of Yes People surrounding a particular internet user and/or a "personal army" of internet users recruited to attack or defend someone in a Flame War or flare of Internet Backdraft, or to promote them or their product. This is connected to Astroturf except that Astroturf is usually for a politician or product or company, while a Meat Puppet can appear anywhere (and are often why a debate escalates to Flame War, Internet Backdraft, or appearing on Fandom Wank levels.) These are usually called Meat Puppet as opposed to Sock Puppet, because they are actually separate people, unlike a Sock Puppet, which is a different user identity (or collection of them) created by the same person. That said, good luck in telling them apart - especially in places that allow anonymity and don't ban proxies.

Examples of Meat Puppet include: