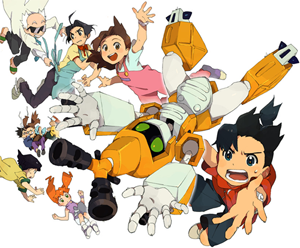 In 22nd century Japan, there is no gravity.

Medabots was originally a Japanese video game series (called Medarot, whose first 'generation' was released for the Game Boy in 1997. As of 2016 still ongoing on the Nintendo 3DS with a 9th game and even more spinoffs) that was later released joined by an anime. It's supposed to be about robots who fight each other, but most of the show is just wacky hijinks. It's the heartwarming tale of robot dog fights, ridiculous plot devices and poorly edited on-screen text. It stands out from other 90s dub anime for its surprisingly dark undertones, relatively solid plot, and the fact that it wasn't afraid to poke fun at itself.

In 22nd century Japan, everybody and their grandmother (literally) has a Robot Buddy, manufactured by the Medabot Corporation and creatively called Medabots. Because they are robots powered by medals which effectively serve as their brains.

Ikki Tenryou is a plucky ten year old whose parents won't buy him a Medabot, and he refuses to save his allowance for one. One fateful day, he finds a medal in the river near his house; teaching children that if you want something badly enough, you won't have to work for it! He takes what little money he does have and buys an extremely outdated model sitting in the back of the local 7/11 Hop Mart, and promptly activates it. It then proceeds to quite beautifully not work. It eventually kicks into action after he calls it a pile of junk, teaching children that if you insult somebody they will be more helpful! However, it soon sought retribution, teaching children not to insult anyone carrying weapons. The worst part is that Ikki can't even eject Metabee's medal to make him stop.

Wacky robot hijinks ensue, including characters with multiple (and mistaken) identities, long repeated flashbacks, and a of course a Tournament Arc. Oh, and they save the world at one point. From... Themselves.

A sequel series, Medabot Spirits (Medarot Damashii) followed up the original, but is largely considered to be inferior due to a majority of the characters being dropped without any explanation, while Ikki and Metabee (the latter given a Shonen Upgrade) remain the main characters.

Not to be confused with Medibot.

Retrieved from "https://allthetropes.org/w/index.php?title=Medabots&oldid=1752740"
Categories:
Cookies help us deliver our services. By using our services, you agree to our use of cookies.