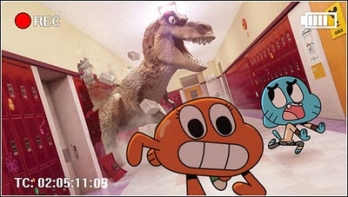 We're just scratching the surface with this show.

Similar to Art Shift, but instead of styles blending it's the blending of animation/filming techniques used to tell a story.

This can come in a lot of flavors like live-action in cartoons, animated segment, or animation warping.

Live-action in cartoons is pretty straightforward; it just means there's a filmed part in a cartoon with live actors. An animated segment is the exact opposite, where a live-action show or movie gets a part that's given some traditional 2D, 3D, or stop-motion part. Animation warping technically keeps an animated show animated, but with a different style than the norm, like traditional 2D animation into 3D. It's probably easier to just list them all as Medium Blending for the moment, as some examples can get tricky with multiple different varieties.

This is the exact opposite of how traditional special effects are used. Instead of supplementing a medium with material of a different source that is meant to blend in, this is meant to stand out. Proper examples of Medium Blending make it blatantly obvious it is different, and it sticks out on purpose.

This can happen with a dose of Medium Awareness sometimes, as well.

Examples of Medium Blending include:

Retrieved from "https://allthetropes.org/w/index.php?title=Medium_Blending&oldid=1742197"
Categories:
Cookies help us deliver our services. By using our services, you agree to our use of cookies.