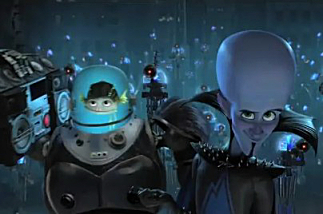 Who says villains can't rock out?

In the Genre Savvy world of spoof superheroes, Megamind, the greatest villain in the world, is locked in an eternal battle against the seemingly invincible and perfect Metro Man. In their last confrontation using Megamind's go-to Damsel in Distress, Roxanne, he finally (and surprisingly) manages to kill his arch nemesis.

As he gloats over his victory, he soon realizes that his greatest wish was his worst nightmare: he had no plans for what to do after he had gotten rid of Metro Man, and he is morose that he no longer has somebody to fight against. To cure himself of this he creates a new superhero, Titan, to be his nemesis. But things do not turn out as planned, and it is up to him to stop his creation before it is too late.

Not to be confused with Mega Man (despite the protagonist's blue-ness as well as the fact that the villain's name is "Mega Mind" and the hero's name is "Metro Man").

Tropes used in Megamind include:
Retrieved from "https://allthetropes.org/w/index.php?title=Megamind&oldid=1919953"
Categories:
Cookies help us deliver our services. By using our services, you agree to our use of cookies.