Everything About Fiction You Never Wanted to Know.
Jump to navigation Jump to search
/wiki/Mel Blanccreator 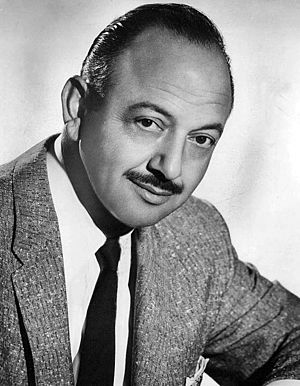 Jerome Melvin Blanc, A.K.A. Mel Blanc, A.K.A. "The Man of a Thousand Voices" was perhaps one of the most prolific voice actors of all time, as well as one of the best. Originally working in commercials and radio shows, Blanc was hired by Warner Bros. in the late 1930s to do voices for cartoons. And the rest, frankly, is history.

Blanc is most notable for voicing most of the cast of Looney Tunes (among other cartoons), often bringing up cases of Talking to Himself. What's amazing is that most people probably wouldn't be able to tell that, most, if not all of the characters in each Looney Tunes short were being done by the same guy. (Leonard Maltin once put his talent into perspective by marveling that Tweety Bird and Yosemite Sam were the same man.) He was that good. It even got to the point that his knack for doing many voices was lampshaded in the Porky Pig short "Curtain Razor". He was also one of the only voice actors in his day to ever get a credit for his work in any theatrical shorts (which led to a variant of Misattributed Song when voices done by Daws Butler, Stan Freberg, or Arthur Q. Bryan were also assumed to be Mel).

His wide range of work gave him the cool nickname, "The Man of a Thousand Voices", hence he is the Trope Namer. (It should be noted that this is an exaggeration; he admitted in his autobiography that he's "only" done around 850 voices).

Oh, yeah, this is his tombstone. The "Speechless" lithograph was also made following his death

Needless to say, Mel Blanc is a legend among voice actors -- his voice-work is considered the 'milestone' that marks the Golden Age of animated comedy, and his characters' catch-phrases are still remembered nearly a half-century later.

Mel Blanc died in 1989, and, to this date, it seems not many voice actors, if any at all, can really match his wide range of voices. Warner Bros. now has a whole staff of voice-actors to cover what was once done by a single man. Some of his roles include...