Everything About Fiction You Never Wanted to Know.
Jump to navigation Jump to search
/wiki/Mel Gibsoncreator 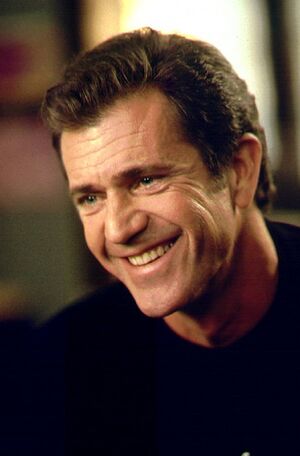 Mel Gibson is an American-Australian actor, film director and producer and screenwriter. The movies he has acted in have grossed more than two billion dollars in the US alone. Born in Peekskill, New York, Gibson moved with his parents to Sydney when he was 12 years old and later studied acting at the National Institute of Dramatic Art.

Gibson broke through with the Australian cult classic Mad Max series and graduated to the A-List with Lethal Weapon in 1987. He went on to star in a number films, usually appearing in action or comedic roles. In 1995 he directed and starred in the Academy Award-winning Braveheart, becoming the sixth actor-turned-filmmaker to receive an Academy Award for Best Director. Behind the scenes, Gibson was known as a Three Stooges fan and a notorious on-set prankster.

After 2002's Signs, Gibson withdrew from the Hollywood system and focused on his own self-financed productions. In 2004, he directed and produced The Passion of the Christ, a controversial but successful film that portrayed the last hours of the life of Jesus Christ. He followed up with another ambitious, self-financed project filmed in an obscure language, Apocalypto.

A devout Traditionalist Catholic, Gibson became more outspoken with his conservative religious and political beliefs after the release of Passion. He also come under fire with allegations of antisemitism and racism, fueled by his father's beliefs as well as comments he made during a DUI arrest. Gibson's controversial statements have made him the subject of frequent parody in the media.

Gibson returned to the Hollywood scene in 2010 with a starring role in Edge Of Darkness. Soon after the film was released, Gibson again drew controversy when his ex-girlfriend released recordings of his expletive and slur-laden phone conversations and also accused him of domestic abuse.

His later acting roles were in more subdued films, like The Beaver[1] , and Get the Gringo.

Mel Gibson provides examples of the following tropes:
Retrieved from "https://allthetropes.org/w/index.php?title=Mel_Gibson&oldid=1950678"
Categories:
Cookies help us deliver our services. By using our services, you agree to our use of cookies.