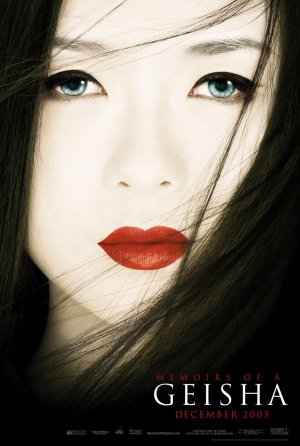 Memoirs of a Geisha is an 1997 novel by Arthur Golden -- later adapted into a 2005 film -- about the life of a famous Geisha, Sayuri (formerly Chiyo), who was sold to a geisha house by her father at a young age to be trained in the profession. One day, she meets a man who becomes her main motivation to pursue a career as a geisha, although she soon starts to realize that he is unobtainable. Meanwhile, Sayuri becomes a pawn in an intrigue between two of the most successful geisha in the district. The plot is set in Japan, mainly in the decades around the Second World War.

Arthur Golden caught a good deal of flak for naming his sources. As noted in the 'translator's note' prologue, geisha are expected to be discreet, regarding what they know and who they know it about, and about their own trade in general. One of Golden's primary sources, former Geisha Mineko Iwasaki, specifically asked to be kept anonymous, and Golden went and thanked her in the author's note anyway. She herself netted criticism (and even death threats) for opening up in such a way, and eventually ended up publishing her actual memoirs, Geisha of Gion. She also said that either Golden downright lied about the geishas and their lives (specifically, the whole "Sayuri gets her virginity auctioned" was supposedly based on Iwasaki's experience, but she claims it never happened to her), or showed experiences that were beneficial to Iwasaki and Co. in a negative light.

Tropes used in Memoirs of a Geisha include:
Retrieved from "https://allthetropes.org/w/index.php?title=Memoirs_of_a_Geisha&oldid=1948714"
Categories:
Cookies help us deliver our services. By using our services, you agree to our use of cookies.