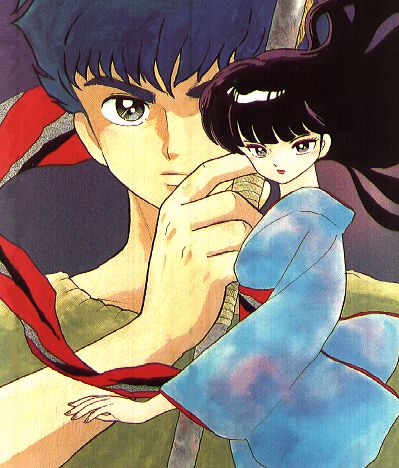 It is said that eating the flesh of a mermaid can give one eternal life. Yuuta, a poor fisherman, didn't really believe the tales, but when the rest of the village tried some, he ate some as well. Less well-known is that mermaid's flesh is fatal to most, and almost all those who don't die are transformed into hideous mindless immortal beasts called Lost Souls. Within days, Yuuta was the sole survivor of his village. 500 years later, he is physically no older, but has grown weary of his lonely existence, and seeks the one creature that might be able to restore his mortality—a mermaid.

In the first of the linked stories, he meets a new immortal (the first he's met in his life) -- a beautiful 15-year-old named Mana, who's been raised in utter seclusion from childhood while being groomed for immortality. The two travel together, in search of a cure that may not even exist—after all, what else is there for them to do? It's not as if they don't have all the time in the world. The other tales are divided among Yuuta's reminiscences of his past adventures over the centuries, and their new adventures in their quest for mermaids.

The manga was the creation of Rumiko Takahashi, famous for creating Ranma ½ and Inuyasha, but is far darker in tone. No over-the-top comic antics, but the terrible things that happen when humans try and seek immortality. Two OVAs were made of individual stories back in the 80s -- Mermaid's Forest and Mermaid's Scar. The former name was used as the title for a recent[when?] TV series which covered almost all the stories (with the exception of Mermaid's Gaze; the Mermaid's Scar episodes were not broadcast, and were on the video release only). Most of the stories took two episodes each.

It's important to note that these are Japanese mermaids, with fangs, fish-eyes and an appetite for human flesh, rather than the siren-like western version. The mermaids are also immortal and (in the manga version at least) can likewise only be killed by beheading or poison. Some can take on human form, but then slowly age, and they need to feed on an immortal woman to take on a new human form - that of the woman they feed on.

Tropes used in Mermaid Saga include:
Retrieved from "https://allthetropes.org/w/index.php?title=Mermaid_Saga&oldid=1775373"
Categories:
Cookies help us deliver our services. By using our services, you agree to our use of cookies.