Everything About Fiction You Never Wanted to Know.
Jump to navigation Jump to search
/wiki/Michael Colecreator 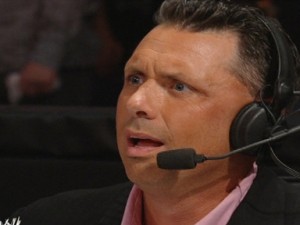 Michael Sean Coulthard (born December 8, 1968), better known by his stage name Michael Cole, is a play-by-play announcer for WWE. He is best known for announcing WWE Smackdown for nine years, from its launch in 1999 until 2008; in 2008, he was switched over to WWE Raw, where he has been ever since.

Lookitlookitlookit! VINTAGE Michael Cole Tropes! And I quote "...
Retrieved from "https://allthetropes.org/w/index.php?title=Michael_Cole&oldid=1927000"
Categories:
Cookies help us deliver our services. By using our services, you agree to our use of cookies.