Everything About Fiction You Never Wanted to Know.
Jump to navigation Jump to search
/wiki/Mick Foleycreator 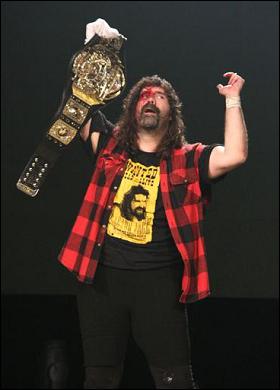 Michael Francis "Mick" Foley, Sr. (born June 7, 1965) is an American actor, author, comedian, voice actor, and professional wrestler. He has worked with every major wrestling promotion in his career, including WWE, WCW, ECW, Ring of Honor, TNA and even a one-off match on an AWA Pay-Per-View, and is currently signed to WWE. He is often referred to as "The Hardcore Legend", a nickname he shares with Terry Funk.

Throughout his wrestling career, Foley wrestled for many different promotions both under his real name and under various personas (which are known collectively as the "Three Faces of Foley" - Cactus Jack, Mankind, and Dude Love) and, frequently since about 2001, as just plain Mick Foley. He was the first ever WWF Hardcore Champion, and he also became a three-time WWF Champion (as Mankind), an eight-time WWF Tag Team Champion, a two-time ECW World Tag Team Champion, a one-time WCW World Tag Team Champion, a one-time TNA Legends Champion and a one-time TNA World Champion. Following his retirement from a full-time wrestling schedule, Foley appeared occasionally with WWE as a special guest referee and, later, a color commentator for the SmackDown brand. Upon his departure from the company in 2008, he signed with TNA, returning to a semi-regular schedule. He then left TNA in June 2011, and has since appeared back on WWE television, albeit less frequently.

In addition to wrestling, Foley is a multiple-time New York Times bestselling author. His first book, the 1999 autobiography Have a Nice Day: A Tale of Blood and Sweatsocks was enthusiastically well received and well reviewed. He has written a sequel to that book, 2001's Foley Is Good: And the Real World Is Faker than Wrestling which partially goes in depth into the writing of the first book and why he decided to write his books himself instead of hiring ghostwriters and also is about the months leading into his retirement during the Attitude Era. The third part of his autobiography, The Hardcore Diaries, was released in 2007. Foley has also written two novels, Tietam Brown and Scooter, and three children's books.

He was also one of the subjects of the documentary Beyond the Mat, which followed him at the peak of his career. More recently, he appears in Bloodstained Memoirs, another wrestling documentary.

Mick Foley provides examples of the following tropes:
Retrieved from "https://allthetropes.org/w/index.php?title=Mick_Foley&oldid=1840249"
Categories:
Cookies help us deliver our services. By using our services, you agree to our use of cookies.