Everything About Fiction You Never Wanted to Know.
(Redirected from Mickey Spillane)
Jump to navigation Jump to search 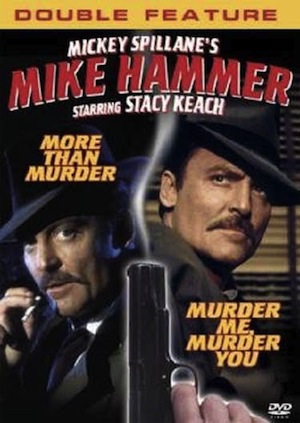 In 1947 comic book writer Mickey Spillane and his wife needed money to buy a new house. Hoping to add to his funds, Spillane wrote a novel in just nineteen days called "I, the Jury". It introduced the world to Hardboiled Detective Mike Hammer, and sold six and a half million copies in the United States alone.

Hardboiled private detectives are expected to be world-weary and cynical; Mike Hammer however is patriotic and fueled by rage at the evils of society. Hammer doesn't just bend the law; he holds it in complete contempt, often dishing out brutal beatings or appointing himself Judge, Jury, and Executioner. Spillane would go on to create other characters, like James Bond expy Tiger Mann, but Mike Hammer is his most well known creation. The novels revel in brutal violence and (though tame by today's standards) contained more sex than the competition. Critics (both then and now) have savaged them unrelentingly, yet they continue to be popular. In 1980 Spillane was responsible for seven of the top 15 all-time bestselling fiction titles in America, and his books have been adapted into film, TV and radio productions.

The following tropes are common to many or all entries in the Mike Hammer franchise.
For tropes specific to individual installments, visit their respective work pages.
Retrieved from "https://allthetropes.org/w/index.php?title=Mike_Hammer&oldid=1918221"
Categories:
Cookies help us deliver our services. By using our services, you agree to our use of cookies.