Everything About Fiction You Never Wanted to Know.
(Redirected from Miles Vorkosigan)
Jump to navigation Jump to search 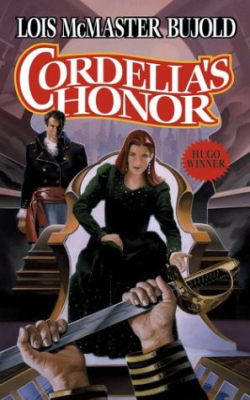 One of the very few non-Contemptible Covers in the series.

Sometimes known simply as the Miles Vorkosigan series, the Vorkosigan Saga is a collection of Space Operas by Lois McMaster Bujold taking place in a future where humans have colonized several new worlds, but continue to embrace all the bad habits that made life so fractuous on Earth. The majority of the stories feature Miles Vorkosigan, son of the Prime Minister of the Empire of Barrayar, who was born short, hunchbacked and with brittle bones as the result of a chemical assassination attempt on his father while his mother was pregnant. The series follows, roughly in chronological order, his parents' meeting and his birth, his construction of a Secret Identity as the admiral of a mercenary fleet, his loss of this identity, and his subsequent reconstruction of his life.

However, there is a lot more humor in the series than that thumbnail description would lead you to believe, and it also examines a lot of timeless social, political and economic issues. Bujold has also written a few non-Miles-centered novels set in the same universe, some of which serve to establish the wider Verse and some of which feature minor or recurring characters from the primary storyline.

Tropes used in Vorkosigan Saga include:
Retrieved from "https://allthetropes.org/w/index.php?title=Vorkosigan_Saga&oldid=1893770"
Categories:
Cookies help us deliver our services. By using our services, you agree to our use of cookies.