Everything About Fiction You Never Wanted to Know.
(Redirected from Milky White Eyes)
Jump to navigation Jump to search 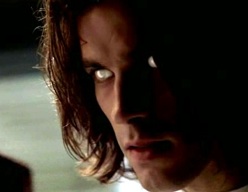 "The boss always looks so stoned when he goes into a trance."
—Spark, Dominic Deegan

Characters with this specific type of Monochromatic Eyes tend to be Blind Seers or have a blindness related Disability Superpower. This kind of blindness is "extra psychic" or special, and is also associated with powers other than prescience. It's not uncommon for some characters in a trance to have their eyes turn milky white while concentrating (rather than roll back into the skull).

Zombies and some other undead or monsters also have milky white eyes, though in that case it's that they don't blink for the former, leading to all sorts of crap in your eye. Don't expect this to stop them from actually seeing/smelling their prey with unerring accuracy.

And sometimes, white eyes simply alert the audience that their owner is supernatural or pure evil.

This effect can be useful for blind characters in live-action productions because human beings instinctively follow movement and zero in on important things like faces with their eyes, an instinct that is just about impossible to suppress. Milky white eyes make it impossible to tell which way an actor is looking and makes the effect of a blind, fixed stare more convincing.

This trope has nothing to do with Blank White Eyes except for the color. For other colors, see Monochromatic Eyes. See also Third Eye for a related mystic eye trope.

Examples of Prophet Eyes include:

Danko: You ship drugs to my country, you wake up and find your testicles floating in a glass of water next to your bed.
Elijah: I'm a holy man. I don't need testicles.
Danko: Then I'll settle for your eyes.
Elijah: You don't scare me, white boy. (takes off sunglasses to reveal his milky white eyes)

Fist Fighter: Hm? My eyes are white? It's because I don't want to look at you!