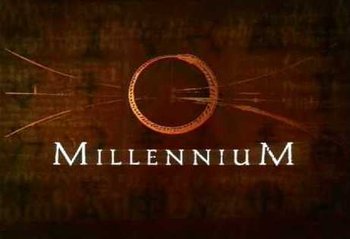 Millennium was a FOX show created by Chris Carter, best known for The X-Files. Lasting three seasons, 1996-1999, it starred Lance Henriksen as ex-FBI agent Frank Black (not that Frank Black), a consultant to various police forces investigating violent crimes with the mysterious Millennium Group. The show was retooled significantly each season--the executive producers of the show changed each season. Throughout the series' run, however, the overall tone remained dark and disturbing, which did not appeal to mainstream television viewers, but earned the respect of a devoted group of fans.

The first season focused primarily on Frank's work as The Profiler, consulting with police forces in catching violent criminals, usually serial killers. The audience saw brief clips of Frank's perception of what the criminals saw, but it was left deliberately vague whether these were psychic visions, or just Frank's non-supernatural, but highly skilled, insights into the criminals' minds. Forays into the supernatural were few and ambiguous in the first season.

The second season delved much deeper into the nature of the Millennium Group and the apocalyptic themes which were behind it. A major theme was the schism in the Group between "Owls" and "Roosters," two factions with different views of the approaching millennium and how it should be handled. It also brought in clearly supernatural themes, angels and demons, and made Frank's visions explicitly psychic.

The third season saw Frank leave the Millennium Group due to their actions at the end of the second season, and return to the FBI. Its subject material was somewhere between the first and second seasons: it returned to some extent to the criminal-of-the-week format of the first season, but also explored mystical and religious themes, and the nature of the Millennium Group as in the second season. Unfortunately, the Executive Meddling in this season led to some outright continuity violations: the plague released at the end of the second season, projected to kill a significant fraction of the population of the North American west coast, instead kills less than a hundred people, which is never adequately explained; we learn that J. Edgar Hoover founded the Millennium Group, after learning in the previous season that the Group's history dates back at least to The Middle Ages.

After cancellation, the show received a Fully-Absorbed Finale in The X-Files episode "Millennium." The episode was included with the DVD release of the final season of Millennium.

The Fully-Absorbed Finale was not well-received by fans, however. Internet fans created an entire fourth season of Fanfic scripts to give the show a proper ending.

The show should not be confused with the 1983 John Varley novel of the same title, or the 1989 film based on it, which deal with an airplane crash caused by Time Travel, or with The Millennium Trilogy.

Retrieved from "https://allthetropes.org/w/index.php?title=Millennium_(TV_series)&oldid=1763787"
Categories:
Cookies help us deliver our services. By using our services, you agree to our use of cookies.