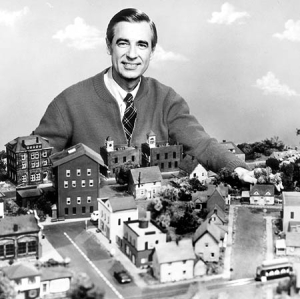 Won't you be my neighbor?

Mister Rogers' Neighborhood was a syndicated children's program that ran for over thirty years, making it one of the longest-running programs on PBS. In the show, Fred Rogers took his viewers on virtual tours with him to demonstrate experiments and music, interacting with his friends on the show along the way. Each half-hour segment also included a puppet show called the "Neighborhood of Make-Believe."

Rogers' show had its earliest incarnation in 1954 as The Children's Corner, a local program airing on station WQED in his native Pittsburgh. Rogers then took his talents to Canada in 1963 with a CBC TV program called Mister Rogers, with Ernie Coombs as Rogers' understudy. After three years, Rogers decided to return to the U.S. while Coombs stayed to eventually became his boss' Canadian TV icon counterpart, Mr. Dressup. Mister Rogers' Neighborhood debuted on National Educational Television (NET) in 1968; two years later, NET became PBS and Rogers' show continued through 2001. The show would inspire an entire generation of children, and, alongside Sesame Street and Reading Rainbow, anchored PBS' children's programming throughout the '80s and '90s. Reruns of the show are still broadcast occasionally, even after Rogers' death in 2003.

It got an animated Spin-Off called Daniel Tiger's Neighborhood in September 2012, based on the character Daniel Tiger.

Didn't contain, but was still related to examples of:

Retrieved from "https://allthetropes.org/w/index.php?title=Mister_Rogers%27_Neighborhood&oldid=1818935"
Categories:
Cookies help us deliver our services. By using our services, you agree to our use of cookies.