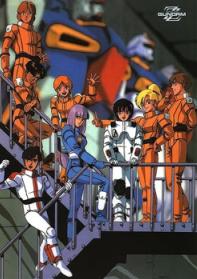 What we found out is that every one of us is a brain, an athlete, a basket case, a princess, a criminal and a half-crazed psychic ten-year-old.

Mobile Suit Gundam ZZ (Kidou Senshi Gundam Double Zeta), is the third series in the highly successful Gundam anime franchise. A direct sequel to the vastly popular Zeta Gundam, Gundam ZZ marks a major departure from the tone of its predessor, despite being (unusually for a Gundam series) a direct sequel. Picking up days after the conclusion of Zeta Gundam, Gundam ZZ's first half is rather light-hearted and generally upbeat, especially after Zeta's Darker and Edgier story. According to reliable reports, it was an attempt to restore Gundam's reputation as a children's series and family entertainment, and its director Yoshiyuki Tomino is said to have made it as a reaction against the incredibly bleak ending of Zeta Gundam. Unfortunately, this resulted in Mood Whiplash, and the entire series is generally frowned upon by the more serious fans who enjoyed Zeta and were expecting more of the same.

Remember, people, that this is what usually happens if you let Tomino do two shows back-to-back.

However, the series eventually undergoes Cerebus Syndrome and becomes much more serious; this is generally considered to have improved the quality. This is at least in part due to the fact that, partway through the production of ZZ, Tomino recieved permission to make Char's Counterattack, thus necessitating major changes in the plotline of ZZ. The series eventually ends in typical Gundam style, though without repeating the ending of Zeta Gundam.

Gundam ZZ was also one of the mainstay titles of the UC Gundams when it comes to Super Robot Wars though it's starting to fall behind, as it hasn't been in a game since Alpha 3. During the announcement of Super Robot Wars Z 2, Terada let it slip that Bandai and Sunrise have something big in mind for ZZ, but what exactly this is is not known.

Tropes used in Mobile Suit Gundam ZZ include:
Retrieved from "https://allthetropes.org/w/index.php?title=Mobile_Suit_Gundam_ZZ&oldid=1899690"
Categories:
Cookies help us deliver our services. By using our services, you agree to our use of cookies.