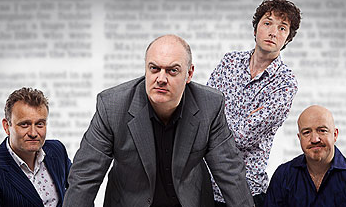 Dara Ó Briain: Hugh and Frankie, just a suggestion, a slight editorial tweak, coming through my ear from the gallery. If we can have some stuff that we can actually broadcast, that'd be great.
Frankie Boyle: Nobody mentioned that.

British Panel Game that is BBC2's equivalent of Have I Got News for You, with strong influence from Whose Line Is It Anyway? (which isn't surprising, considering they were created by the same people). It involves only comedians and is hosted by Dara Ó Briain, an Irish comedian. The series started in 2005 and is still ongoing. As of 2019, it had had eighteen series.

The show's regulars are Hugh Dennis (from the start) and Chris Addison (series 9-present) and guest on one team and Andy Parsons (series 3-present) and two guests on the other. Former regulars are Russell Howard (series 4-9), Frankie Boyle (series 1-7) and Rory Bremner (series 1 and 2). The guests are usually English, Scottish, Welsh, and Irish comics, but occasionally include American, Australian, and Canadian comedians.

(the letters are T.F.H.C. -- and the players have been going on in the same vein for some time)
Dara: Let me give you a clue -- the first three letters do not stand for "This Fucker Has..."!
Hugh Dennis: Is it "That Fucker Has Cancer"?
'Dara: Stop saying fuck! The 'f' doesn't stand for 'fuck!

(answer: "15 per second")
Lauren Laverne: How many pounds sterling is Simon Cowell paid to cut the cultural throat of our nation and drink its still-warm blood?
Dara: ...that's not what I have on the card.
(actual question: "How fast were copies of the final Harry Potter novel selling on release day?")

Dara: Our viewers at home are probably thinking "What's this game? I've never seen it before!" Well, that's cause we never fuckin' broadcast it.

[The picture is a group of men dressed as Santa]
Frankie: Is this a picture of the sperm inside Santa's testicles?
Russell Howard: This is actually what goes on inside Christmas crackers.

Prince Philip (at a tour of a police station, spotting officers waiting to meet him): "Oh, my. It's the fuzz. No, no, I didn't know it was an osprey..."

(Series 1-2 only; mainly dropped because Rory Bremner, their best impressionist, left the show and all the games involved impressions to some degree)

Rory Bremner (as Nelson Mandela): "I'm over eighty. I look like a pint of Guinness. But wait until you see "Nelson's Column"!"
Frankie Boyle (as Michael Jackson): "Hello. I'm sort of like a Scooby Doo villain. I hang around an abandoned amusement park wearing a plastic face."

Al Murray: "Speaking as THE VOICE OF THE SILENT MAJORITY...! Of course, having said that, I'm no longer a member..."

Al Murray: "...I think we should go back to The Queen. And I'm not just saying that out of mindless loyalty."
Dara: "Why, then?"
Al Murray: "I fancy her."

Al Murray: "Speaking for the people who would have shot that burglar a third time...I wouldn't have done that. What I would've done is dug a pit with spikes, put a rug on top, they fall in -- (holding imaginary rifle) BANG! BANG! BANG! WHO'S THERE? BANG!"

(regarding some frogs having exploded in Germany, and the House reacting as though it was a terrorist threat)
Hugh Dennis: "I would like to know how the government plan to catch these frogs trying to enter Britain and if they do, will they slam the toads in the hole?"

Frankie Boyle (as Tony Blair, to George Bush): "You mean I left [my wife] Cherie behind?"

Tropes used in Mock the Week include:

Miles Jupp: While I've been speaking, I imagine that a lot of the ladies in here have been looking at me, thinking is he... or isn't he? Well, I've got to be honest with you ladies: I am looking for a cleaner.

Seann Walsh: (miming talking on a phone) "Just call the police." (Walks off again, miming throwing the phone over his shoulder)

Chris Addison: I share a bed with a woman, does that make me a lesbian?

Russell Howard: "Dear Diedre: Can that giant man lift me up like a baby?"

Dara: [mimes piano playing] "Keep it going, there'll be one along in an hour or so..."

(category: "Unlikely Lines To Hear On A TV Election Debate")
Milton Jones: "Hellooo! I am the Messiah! And the Queen... is a biscuit!"
Hugh Dennis: "I am almost certain that was a floating voter."
(the answer in the "If This is the Answer..." round is 15)
Milton: Is it how many magic biscuits there are on the magic biscuit tree?
Dara: I would love that to be the correct answer. But there are in fact 19 magic biscuits on the magic biscuit tree!
(Another "If This Is The Answer..." suggestion:)
Milton: Is it how many tiny farmers with their tiny ploughs does it take to make a field of curduroy?

[The answer is "Between 19 and 23"']
David Mitchell: Is it the number of English counties likely to be underwater in a hundred years' time?
Dara: Yes, indeed it is!
David: [Face Palm] Jesus Christ! That's terrible!
John Oliver: Less a joke, more an alarming fact!
David: I thought of something ridiculously awful, turns out it's gonna happen!

Frankie Boyle: "If you go to his gravesite, there's no weeds. (lets it sink in) In fact, there's no plant life for a mile around. And if you look, you can find all sorts of small woodland creatures who've just died of sadness, Dara."

Miles: Dear Santa, this Christmas could I please have a less violent step-dad?

Frankie Boyle: "The other night I watched Nigella Lawson and picked up a couple of good tips on baking bread, and in the process I just about ripped my cock off."

Russell: Whoa... how pissed was I when I asked you out?!
Andy: Not as pissed as I was when I said "yes"!

Russell Howard: "Did you happen to see the News24 reaction? It was fantastic--cause it came, like, 'News just in--' and they found out about the Viagra tabs, and it was brilliant because they were doing little puns! They were genuinely kinda goin'--'I bet that's a hard case, heh.' 'I think they'll get a stiff sentence.' And then you could genuinely see--they obviously got a word in their ear and they went, *disappointed, head drooping* 'Yeah, okay...'"

Milton: "I always wonder what my father would have thought of me going into comedy; he was a master kebab chef, buried with all his equipment... probably turning in his grave."

Ed Byrne: During my college years, some marijuana was passed around. I did it in snow, I did it in sleet, but I did not...inhale. *silly dance*
Chris Addison: The Bronze Age was the third best age in history. *jumps up, clicks heels together grinning*
Milton Jones: [The Queen] is saying "I don't know where I am," and [the Indian Chief] is saying "It's okay: I am Sat-Navajo!" *face-palms*

Frankie: "It's all so bright up here."

Frankie: "It's so dark and cold down here, Dara. I can just see the edges of your faces."

Milton: (On Peter Mandelson) It's weird to think that he's Nelson Mandela's son.
Milton: (On William Hague) I've been reading up on William Hague, and he has to compete with Rotterdam as a port.
Milton: (On Vladimir Putin) I actually prefer the word chamberpot to poo-tin.

(the "answer" is "Risky, Serious, and Heroic")
Russel: "What are Snap, Crackle, and Pop's DJ names?"

Frankie: "Well, there's good news--you've had a baby; the bad news is, it's blown your cock off!"

Adam: (beat) "I did it, I finally said something that no-one took the piss out of!"

"It's like, being in charge of a special school on a day out."

"Impossible to declare a winner in that round, because the two of you are on the same team, so I'm going to give the points to this team!"

Frankie: I'm not the King of the Daleks... I'm their Creator.

Frankie: "You can get Princess Diana Sat-Navs now, but all it says is "Put your foot down, I think we can lose them"."
(everyone groans, amused and/or appalled)
Frankie (grudgingly): "That joke can go either way, if I'm honest."

Frankie: "If they want to do an anti-speeding video..."

(Scenes We'd Like To See: "Things A Sports Commentator Would Never Say")
Adam: "And England have won The Ashes."[2]
Crowd: "BOOOOOOOOOOO!"

(Scenes We'd Like To See: "Bad Things To Say In A Job Interview")
Andy: What do I see myself doing in five years' time? Exactly the same, only on Dave! (Wild applause from the audience)

"It's been speculated that drug abuse is rife in the farming community, but it's hard to find any evidence; it's like looking for a..."

Dara Ó Briain "See, the last time Britain lost the Ashes in a white wash, it was in 1921. But at least that time they had a decent excuse -- the first eleven had all been killed at the Somme..."
{audience groans)
Dara: "What, too soon?"

Chris Addison: "Gardening service, middle of the night a speciality, call Rose West on Broadmoor..."
(audience groans)
Chris: "What, too soon, too soon?"