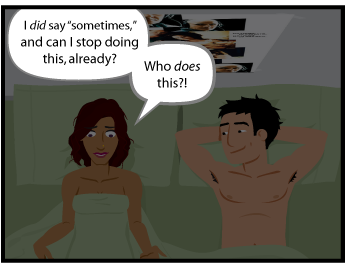 Of course the movie nerd would request a modesty bedsheet.

A nude character gets out of bed and wraps up in a sheet pulled from the bed to avoid exposing nudity to a sex-partner and, coincidentally, to the viewer.

Somebody, somewhere, may have actually done this in real life. Once. Maybe. It's of course largely illogical, as they've already seen each other completely naked. It's equally illogical when a character is actually all alone—although a chilly bedroom might be a possible explanation.

Also, when a man and a woman are nude in bed together, the sheet falls to the man's waist but covers the woman's bust. Somebody in TV land must be selling L-shaped sheets. This version of the trope is also known as the His 'n' Hers Bedsheet. There's also the unisex bedsheet that also falls to the woman's waist and leaves her bust uncovered. The latter was very popular during the seventies and early eighties.

Another way to serve the same purpose is to leave the actress' bra on (which is probably just as rare in real life as dragging the sheet off with you). Sarah Jessica Parker was criticized during the run of Sex and the City for relying on these techniques to avoid topless scenes, which her co-stars did perform.

Note also that women are rarely on top; it's harder to shoot a woman on top without showing her breasts. Missionary position is TV-friendly. The Modesty Bedsheet covers both partners in this position, and allows for lascivious hip churning while never actually showing anything explicit.

Even in pay cable shows such as Entourage and Californication, which freely show topless women, sex scenes frequently feature sheets tightly wrapped around the waists of the two actors simulating coitus in a manner that would be difficult and time-consuming to accomplish in real life.

There is also "Magic Boxers/Knickers", where after a night of passion, a character gets out of bed with their underwear on.

Also occurs outside strictly sexual settings, when characters who really should be nude in the context keep their underwear on. Examples: a corpse on a slab in the morgue being nude except for the underpants, and bathing/showering with underwear or swimwear on, even when the character is alone.

Whether you believe it or not, this trope is actually Older Than Feudalism: There are numerous Roman wall paintings depicting couples during sex - with the woman wearing a brasserie, because it would've been considered lascivious for her to show her breasts. To her own husband. During sex.

See also Scenery Censor, Modesty Towel, Modesty Rags, and Right Through His Pants. Compare Toplessness From the Back, another way of showing nudity without showing nudity.

Examples of Modesty Bedsheet include:

Retrieved from "https://allthetropes.org/w/index.php?title=Modesty_Bedsheet&oldid=1946949"
Categories:
Cookies help us deliver our services. By using our services, you agree to our use of cookies.