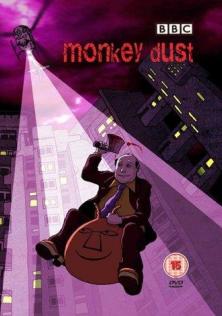 Paedofinder General: So! You confess that for nine months you imprisoned a naked child in your stomach before forcing him backwards through your genitalia for your own sick amusement!

"Random caller": (angry after being misunderstood by the answering 'machine' several times and kept in a waiting loop for the whole evening) Listen, can I just talk to a real fucking person?!
"Guy": I, am, a, real, fucking, person.

Tropes used in Monkey Dust include:

"I only said I done it so they would call off the monkey tattooist."