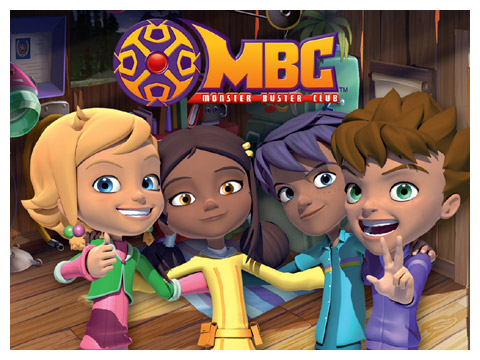 Monster Buster Club is a French-Canadian co-produced computer-animated series produced in 2008-2009 by Marathon, the animation company where Totally Spies! and Martin Mystery were created. It's about a foursome of twelve-year-olds (Sam, Chris, Danny, and Cathy) who, as members of an "age-old" secret society called the Monster Buster Club, protect the city of Singletown from troublemaking aliens.

The four kids are all surprisingly mature for their age; not only do they not seem to depend on their parents, they've been seen to hold part-time paying jobs in spite of being twelve years old. Their only adult supervision comes from Cathy's grandfather, a well-meaning alien disguised as an old man who oversees the Monster Buster Club's operations, although he's far from a reliable mentor, being much more interested in tending to his garden.

In each episode, the kids' everyday affairs are interrupted by one of the outrageous alien villains from their Rogues Gallery (often with a bizarre, harebrained scheme such as turning the entire planet Earth into an exclusive nightclub), whom the kid heroes must suit up and stop. Along the way, they must also deal with obnoxious millionaire Mark and their school principal, Ms. Rollins, who was an officer in the armed services and runs the school like a battleground.

Now has a Character sheet. Tropers are encouraged to contribute.

Retrieved from "https://allthetropes.org/w/index.php?title=Monster_Buster_Club&oldid=1750532"
Categories:
Cookies help us deliver our services. By using our services, you agree to our use of cookies.