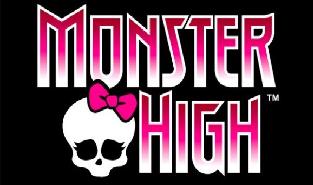 Where the ghoul kids rule.

The dolls have been noted for their unique concept and high doll quality, including ball-jointed limbs and individual face molds for each of the characters. A series of books done by The Clique writer Lisi Harrison currently[when?] being made, and a movie in 2012. A Halloween special aired on Nickelodeon on October 31, 2010 and can now be seen online, with another special following in 2011 and a Valentine's Day special and Spring Break special in 2012.

Tropes used in Monster High include:
Retrieved from "https://allthetropes.org/w/index.php?title=Monster_High&oldid=1955152"
Categories:
Cookies help us deliver our services. By using our services, you agree to our use of cookies.