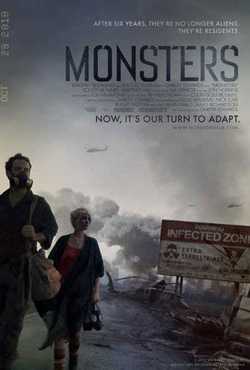 Monsters is a British sci-fi thriller released in 2010.

Six years ago NASA believed they had finally discovered alien life in our solar system and went about trying to gain themselves a sample. Unfortunately the probe they sent crashed upon re-entry over an unsuspecting Central America. It wasn't long before new (and terrifying) lifeforms emerged and spread at such an alarming rate that half of Mexico found itself quarantined. Now as the Mexican and American military struggle to prevent the creatures from expanding outside of the "Infected Zone" our story begins.

Andrew, an American photojournalist, is tasked with helping his rich employer's daughter, Samantha, get back home to the states. As you'd expect the simple train ride home is prevented by damage to the tracks and soon the pair find themselves on a dangerous journey through the infected zone to reach the US border.

Notable for its miniscule budget but high quality special effects. Director Gareth Edwards' experience working with visual effects (which he personally did for the movie) proved to be an incredible asset. All of the extras were just people that happened to be around while filming and a lot of the scenes were shot on location without worrying about the trivial need for permission to film.