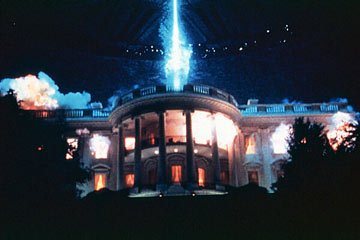 So you're a marauding monster, invading alien, or anything that has a tendency to cause massive collateral damage. But you not going to destroy any random building, are you? No, where is the fun in that? You're going to behead the Statue of Liberty, or blow up the White House, or anything recognizable enough that by destroying it, you can show the world that you mean business.

If you plan on attacking all over the world make sure you target a wide range of easily identifiable landmarks throughout. Due to Small Reference Pools, no one will take you seriously unless you get the Pyramids, the Eiffel Tower, the Taj Mahal or the Westminster Clock Tower ("Big Ben", that is). Just killing people throughout the world won't cut it, we're afraid.

Avoid the Lincoln Memorial, though. No invading lifeform has ever attacked it.[1] The stone must be cursed somehow.

Occasionally inverted when an occupying power takes control of a landmark of some kind, forcing the defenders to destroy said landmark.

A consequence of the Eiffel Tower Effect. Frequently seen in disaster movies. Compare Monumental Battle and Rushmore Refacement. Tokyo Tower gets messed up so much it's also its own trope. See Weaponized Landmark when the monument shoots back. Not to be confused with Monumental Theft or damage that is monumental in the "very big" sense.

Extra points if you knock them over.

Sometimes Inverted: The monument - although battered - is the only thing left standing in the city After the End.

When characters deliberately aim for monuments for symbolic value, this overlaps with Smash the Symbol.

Examples of Monumental Damage include:

During the attack on New York, the Statue of Liberty is shown as having been decapitated. Just to add insult to injury, Great Mazinger is knocked through the remains of the statue and falls on the head. Elsewhere, the Great Pyramids, Sydney Opera House, and Great Wall are also damaged by Super Robot / Robeast combat.

They are also shown melting the Eiffel Tower in the background while slaughtering the French President and his cabinet, and taking a picture in the Taj Mahal while blowing it up at the same time.

Retrieved from "https://allthetropes.org/w/index.php?title=Monumental_Damage&oldid=1897361"
Categories:
Cookies help us deliver our services. By using our services, you agree to our use of cookies.