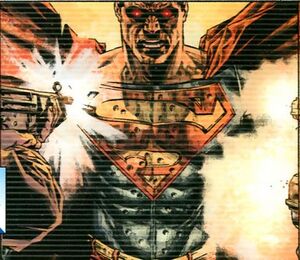 He can't be bargained with. He can't be reasoned with. He doesn't feel pity, or remorse, or fear. And he absolutely will not stop, ever, until you are de-er, brought to justice.

The Mook Horror Show is a scene that plays out like a Horror/Slasher Movie film but casts the hero as the monster. Depending on the hero, it could involve Let's Split Up, Gang! and slinking through shadows, a Five Rounds Rapid followed by a frantic retreat, or any other situation that attempts to show how cool the hero is by emphasizing the terror of his foes.

Unless we're looking at an Anti-Hero, Sociopathic Hero, or Designated Hero, the mooks probably aren't being slaughtered in horrifying ways, unless they happen to be intelligent robots, aliens, or monsters. If the minions are human, this sort of conduct will probably be bad for the hero's publicity.

This trope is a frequent component of the Roaring Rampage of Revenge and often overlaps with Villainous Valour. Sometimes used to demonstrate that Dark Is Not Evil. May also be invoked by a hero to Pay Evil Unto Evil to a villain who enjoys subjecting others to this type of thing to give them a taste of their own medicine. They may also play it up in order for various reasons. Among others, they're probably going to not fight you at 100% if they're too busy screaming in blind terror of you.

Not to be confused with The Rocky Horror Show.

Examples of Mook Horror Show include:

Retrieved from "https://allthetropes.org/w/index.php?title=Mook_Horror_Show&oldid=1963460"
Categories:
Cookies help us deliver our services. By using our services, you agree to our use of cookies.