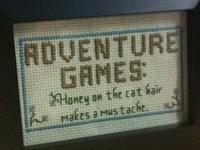 Just wait until you have to figure out where to use the cross-stitch itself...[1]

Sometimes, it's easy to see how to Solve the Soup Cans - give the chicken noodle soup to the guard with the cold, trade the tomato for the red orb, and pour the cream of mushroom into the chalice with Mario engraved on the side. The puzzles may be challenging, but given enough thought, the solution follows a logical progression.

And then sometimes, standard logic just won't get you to the right answer, no matter how hard you try. To find the solution, you have to look at the problem in a way that may seem entirely unintuitive on its face. This is not a Guide Dang It; all the information you need to complete your objective is right there in the source. Some people will be able to make the intuitive leap almost immediately, others will struggle for hours and still never spot the bend in logic that leads to the answer.

If a frustrated player eventually does reach for the strategy guide, there will be two common reactions on discovering the answer: If the puzzle is well written, the answer will make complete, brilliant sense in hindsight, and the player will respect the puzzle designer, perhaps curse themselves for giving in to the strategy guide, or for needing it in the first place. Other times, the clues that would have led to the solution seem so out of left field that it leaves the player wondering "how was I supposed to know that?" Such "out of left field" examples might entail figuring out the third meaning of a Double Entendre someone you talked to 20 hours ago made or listening to the unlisted audio track included on the bonus disc that didn't come with the rental. It makes sense after you read the answer, but you still don't think anyone could possibly solve it on their own. Even a highly skilled, Genre Savvy puzzle-solver will occasionally get stuck on one of these. When this is bad enough that hundreds of players will get stuck on this puzzle, it's That One Puzzle.

In real life, the genre of brainteasers known as "lateral thinking puzzles" or "insight puzzles" often fall in this category. As a character trait, the Cloudcuckoolander may best display the skills necessary to tackle these kinds of problems; anyone else will have to rely on Bat Deduction.

Examples of Moon Logic Puzzle include:

Retrieved from "https://allthetropes.org/w/index.php?title=Moon_Logic_Puzzle&oldid=1751249"
Categories:
Cookies help us deliver our services. By using our services, you agree to our use of cookies.