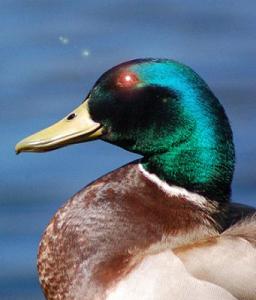 Ducks: the All-Terrain Animal. It's generally agreed that ducks are cute, particularly ducklings. They're also sort of funny, what with the webbed feet, the quacking, and the goofy waddling to and fro. Heck, even the word Duck is funny on its own. But there's also something slightly sinister about them: the beady eyes, the low-pitched quacking, or of course the song about them, "March of the Sinister Ducks". Although rarely outright evil in cartoons (these roles are generally reserved for reptiles, rats, or humans), ducks are rarely heroic either. They might be an Anti-Hero, or The Lancer, or maybe a Trickster, though. They've got knives, you know.

Donald Duck and Daffy Duck are the most likely Trope Makers.

This trope can also cover the less-than-friendly geese and swans that the avid bird-watcher might meet in fiction. Or real life.

Named for Morally-Ambiguous Doctorate, who's usually not such a quack.

Examples of morally gray ducks include:

Of course, if you played its sister game Martian Revenge, you'd know that Bugs saved the day and Daffy would indeed go on to make a TV movie of his own supposed heroism, infuriating Marvin enough to return to Earth as a Villain Protagonist.

Retrieved from "https://allthetropes.org/w/index.php?title=Morally-Ambiguous_Ducktorate&oldid=1639037"
Categories:
Cookies help us deliver our services. By using our services, you agree to our use of cookies.