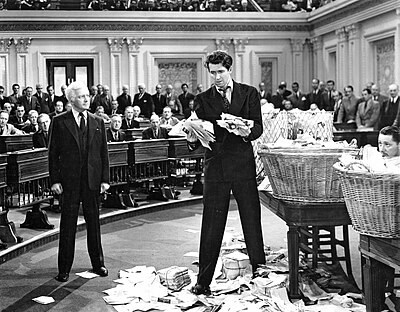 Go ahead; write your Congressman. It really frustrates them.

Mr. Smith Goes to Washington is a film from 1939, directed by Frank Capra, starring Jimmy Stewart, Jean Arthur, and Claude Rains. One of Capra's greatest works.

A senator dies in the middle of his term, and the state Governor has to pick a replacement. The crooked political machine would like one candidate, but this man is already known to take positions unpopular with the populace of that state; there are petitions to pick a radical for the office.

The Governor decides to Take a Third Option: He picks someone who is highly idealistic but inexperienced in politics, whom he thinks the political machine can keep under control. This person, this new senator, is Mr. Jefferson Smith, his son's Scout Master.

Mr. Smith gets to meet his idol, the other senator for his state, who did great things for the state many years ago and who was a personal friend of Smith's father. He's controlled by the machine now, but Mr. Smith isn't really aware of the machine yet.

Once in Washington, he also meets his chief of staff/secretary – a very beautiful, intelligent Femme Fatale. She does have a heart of gold, but she's an utter cynic.

Now, there is one problem the state machine has with Mr. Jefferson Smith. Mr. Smith has one issue he supports – building/improving a Boy Scout camp by a major river in the state. But one of the main goals of this machine is to dam the river (to produce profit for the machine boss, who owns some of the land), which would wipe out many of the natural attractions Mr. Smith hopes to preserve. So, the senior senator and his secretary have to prevent Mr. Smith from voting against the dam, decoying him away from a session where a crucial preliminary vote on the issue is held by sending him on a date with the senior senator's daughter.

Mr. Smith tries to protest the decision within the Senate, but when he yields the floor to the senior senator of his state, he is framed for ethics violations and it is moved that the Senate should consider expelling him. He almost resigns, but his secretary begs him to fight, asking, what would the Boy Scouts he led before becoming junior senator think of politics if he quit now?

So, he doesn't quit. Instead, he holds a very long filibuster, never yielding the floor, never stopping, reading the Bible and the Constitution and the rules handbook, all to buy time for his supporters to send signs of his support. His supporters – many of them too young to vote – do try to show their support, but the machine is actively fighting them...

Eventually, Bags of Letters do flood in, but the machine has successfully swayed public opinion through the media, and the most of the public is against Smith. He declares his intention to keep on fighting in an impassioned speech about how sometimes lost causes are the only ones worth fighting for, then collapses from exhaustion. Overcome by guilt, the senior senator has a Villainous Breakdown. Smith is vindicated.

Tropes used in Mr. Smith Goes to Washington include:
Retrieved from "https://allthetropes.org/w/index.php?title=Mr._Smith_Goes_to_Washington&oldid=1921801"
Categories:
Cookies help us deliver our services. By using our services, you agree to our use of cookies.