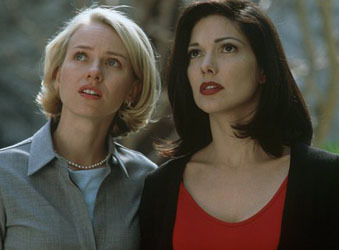 Betty (left) and Rita (right) are also wondering what the hell is going on.

It's strange calling yourself.

Mulholland Drive is a 2001 drama/mystery Mind Screw directed by mind screw king David Lynch that helped (finally) launch the career of Naomi Watts. The movie received generally positive reviews. At the end of the 2000s it has been called one of the best films of the decade by quite a few critics and viewers.

The positive critical reaction even included a four-star rave review from Roger Ebert who, with the exception of The Straight Story, had hated most of Lynch's films. Previously, Lynch had celebrated the "two thumbs down" from Siskel and Ebert for Lost Highway.

Many of those who saw it admitted to having no idea what the hell it was about: True Art Is Incomprehensible. Like several of Lynch's films it aims to work as poetry more than a linear narrative.

The plot primarily focuses on two young women: Betty Elms, a perky blonde Canadian who comes to Hollywood to pursue an acting career, and Rita, a sultry brunette who's developed a case of amnesia after an attempted hit on her turned car accident on the titular Mulholland Drive.

After arriving at LAX and moving into her aunt Ruth's apartment, Betty discovers a nude Rita in the shower and isn't too weirded out because she thinks that Rita is a friend of her aunt Ruth's. However, she soon finds out that Rita has amnesia and that all she remembers is being in the accident. They then discover not only sets of 100 dollar bills in Rita's purse but also a blue key, further increasing the mystery. So out of the goodness of her heart and because "It'll be just like in the movies!", Betty decides to play Nancy Drew and help Rita discover her true identity, and the two become fast friends (and more).

In addition to the main plot, there is also a film director who just can't seem to catch a break. He even walks in on his wife in bed with their pool man, played by Billy Ray Cyrus of all people. Betty's eccentric landlady is played by Ann Miller in her final role before her death. There is a terribly inept hitman played by the incomparable Mark Pellegrino, a creepy cowboy who may or may not be part of this world, a surreal theater with an even more surreal magician/MC, that mysterious blue box, and some sort of grungy zombie hobo who lives behind an old-fashioned diner and gives a man a heart attack at just the sight of it.

Yes, it's one of those movies.

A well-made movie, but certainly not for everyone. Just like nearly every Lynch film, viewers tend to Love It or Hate It. But it's certainly worth watching at least once, as the direction is aces, the writing is clever and the acting is fairly solid across the board, especially that of Naomi Watts. Just expect lots of Mind Screw and lots of High Octane Nightmare Fuel.

Tropes used in Mulholland Drive include:
Retrieved from "https://allthetropes.org/w/index.php?title=Mulholland_Drive&oldid=1560881"
Categories: