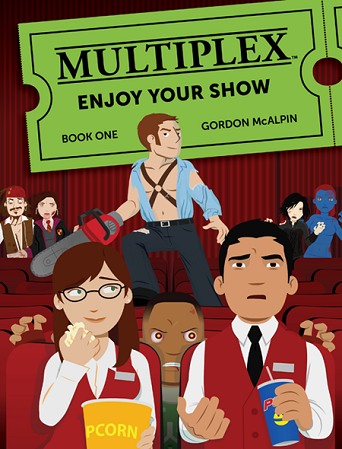 Multiplex is a Webcomic by Gordon McAlpin.

It's right over here.

Set in the (fictional) Multiplex 10 Cinema, the strip is an interesting blend of Comedy and Teen Drama, littered with lots of movie (and movie theater industry) commentary and criticism about everything from actual movies, to directors and actors, to the debates underlying certain documentaries. The various antics, misadventures, and industry-speak of the cast form the basis for a lot of the humor, and the entire basis for said drama (which thankfully comes in small doses).

The strip manages to create a good balance between all these elements, interspersing the movie commentary and relationship drama between lots of gags, more than one video game challenge, and a good dose of character development.

Despite its setting and the characters, it is very accessible, and the author is part of a podcast panel which goes into more detail on many freshly released movies, as just one of several projects.

The strip also has several things which make it easier to read, including a fairly helpful comments section, with a "related strips" sub-section, and it is one of the many webcomics starting to use a "tagger," which lets the reader cookie the strip they were reading.

Tropes used in Multiplex include:
Retrieved from "https://allthetropes.org/w/index.php?title=Multiplex&oldid=1453835"
Categories: