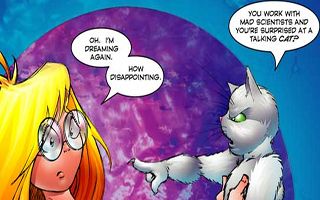 Don't make it more awkward than it is.

More than the Fantastic Comedy (which is still predominantly normal), the complete mesh of fantastic elements into a universe nonetheless treated as mundane for the most part. It is not ruled by suspension of disbelief since the fantastic elements are presented in a logical fashion; the audience does not demand a plausible explanation.

For a purely artistic standpoint, the Mundane Fantastic is a major reason why a show might be animated instead of done live. On the other end of the spectrum, there's the idea that if a cartoon is to be taken seriously it has to be serious and played straight. A Mundane Fantastic show may Jump the Shark if a new writer comes on board and decides that all the fantastic elements have to be explained to death.

In many cases, this attitude is Justified as more "realistic". In our world, hackers or pilots may be "more noteworthy than usual", but most of us don't feel compelled to talk about them all the time or give detailed explanations of them at the drop of a hat. So the people who know their world has two or three wizards in every town would likely consider this normal too. Not that everyone knows the difference anyway.

Anime uses this very frequently, which probably contributes to the perception of inherent strangeness for that medium.

Examples of Mundane Fantastic include:

Retrieved from "https://allthetropes.org/w/index.php?title=Mundane_Fantastic&oldid=1710502"
Categories:
Cookies help us deliver our services. By using our services, you agree to our use of cookies.