Murder Is the Best Solution 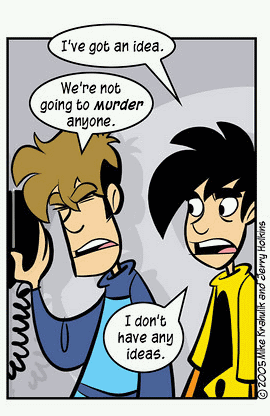 Essentially, there is some sort of problem, and immediately someone suggests killing as the solution, despite there being multiple other, better, and more rational solutions.

Sometimes done to show that the villain really is evil, or at least Ax Crazy. Most often it's Played for Laughs. Bonus laugh points if killing makes the problems even bigger than other solutions. Either way, a clear product of the Rule of Drama... or Rule of Funny. Common with Trigger Happy characters, and when Played for Laughs by the Heroic Comedic Sociopath. Usually only a suggestion or threat, only rarely carried out. In its most extreme form, it can become a Kill'Em All solution.

What will pretty much always subvert this trope is traveling back in time to kill Hitler.

In contrast with Violence Is the Only Option, where other options aren't reasonable, when Murder Is the Best Solution there are plenty of other options, but murder and mayhem are chosen anyway. Compare with Cutting the Knot, which is essentially violence being used as an answer - though the success varies.

Compare Stating the Simple Solution or Kill Him Already, when someone else suggests murder as a more sensible alternative to, say, a Death Trap. If the target is sent on a suicide mission, or if his death is arranged to occur by the hand of a mutual enemy, it's The Uriah Gambit. May require The Coroner Doth Protest Too Much in order for the perpetrator to get away with it (though probably not for long.)

Examples of Murder Is the Best Solution include:

Retrieved from "https://allthetropes.org/w/index.php?title=Murder_Is_the_Best_Solution&oldid=1875074"
Categories:
Cookies help us deliver our services. By using our services, you agree to our use of cookies.