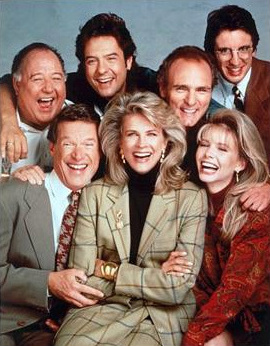 The show was hugely popular in its day due to its topical, often controversial storylines. What really put it on the map, though, was when Murphy became a single mother (unique for a sitcom at the time) and the show portrayed this in a positive way (unique for any TV show at the time.) Conservatives balked, especially then-vice president Dan Quayle, who attacked the show as being against "family values." The show responded by directly mocking Quayle, and this little feud propelled it to the top of the ratings. Various other politically-charged storylines kept the show afloat for a ten-year run, and the show won Candice Bergen five Emmy awards for Best Actress in a Comedy Series.

Tropes used in Murphy Brown include:
Retrieved from "https://allthetropes.org/w/index.php?title=Murphy_Brown&oldid=1932056"
Categories:
Cookies help us deliver our services. By using our services, you agree to our use of cookies.