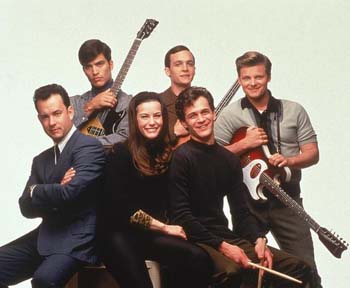 Music Stories are like Sports Stories, but instead of sport players and teams trying to win games, the Music Stories are about musicians or music groups trying to overcome challenges related to performing music or using musical activities to solve other problems in their lives. Series about the every day lives of a fictional or fictionalized music star might also be considered Music Stories or partial examples if musical performance is a regularly featured element of the story. Sometimes the music group also gets involved in non-musical adventures that may cross into other genres, however musical performances will still play a major role.

Some of the many common plots include individuals or bands trying to make it big in a competitive and sometimes hostile music industry, music teachers trying to make a difference in the lives of their students either in an established music group that has declined or by creating a new music group, fictionalized biopics about historic Real Life musicians and composers, and kids (often troubled) pursuing their musical dreams by joining school choir or band, and then trying to balance their musical training with their academics and personal life. Sometimes the existence of the music group might be threatened with a funding cut that would destroy it, and the musical group must revitalize and revamp itself in order to impress the powers that be with their newfound talent and popularity to retain their funding source. Other times the music group might be raising money for a charity outside of itself.

Unlike The Musical, dialog and exposition is not told primarily through song, and characters mostly confine their music to performances and practicing rather than, say, spontaneously breaking out into an elaborate choreographed song and dance number during their high school lunch break. Music Stories are mostly not musicals, but a few musicals are Music Stories because their plot centers on music training and performance. The Sound of Music would be a perfect example of a work that is both a music story and a musical.

Examples of Music Stories include:

Retrieved from "https://allthetropes.org/w/index.php?title=Music_Stories&oldid=1957409"
Categories:
Cookies help us deliver our services. By using our services, you agree to our use of cookies.