My Little Pony: Friendship Is Magic/Recap/S2/E19 Putting Your Hoof Down

Everything About Fiction You Never Wanted to Know.
< My Little Pony: Friendship Is Magic‎ | Recap‎ | S2
Jump to navigation Jump to search 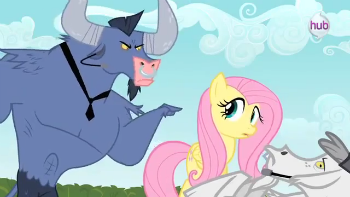 When life becomes a thorn, GRAB IT BY THE HORNS.

Iron Will: Don't be sorry, be assertive! Never apologize when you can criticize!

Fluttershy's having a rough morning. Angel Bunny angrily refuses to eat his breakfast, and insists Fluttershy make a big, fancy salad instead. She goes grocery shopping for the ingredients, only to repeatedly get cut off by other ponies in line. Pinkie Pie and Rarity try to help by teaching her to be assertive, but Fluttershy's attempts to emulate their techniques backfires, and she eventually leaves without the last ingredient -- the cherry on top. She makes the salad anyway, but since it wasn't completely perfect, Angel throws a tantrum... and throws Fluttershy out the front door! As Fluttershy laments just how much of a doormat she is, she finds a flyer from Iron Will, a motivational speaker who's holding a seminar to teach ponies to stand up for themselves. Iron Will turns out to be a hulking, boisterous minotaur who advises his audience to be aggressive and pushy, and lures them in with his show-boating and a 100% satisfaction, money-back guarantee. Will demonstrates the effectiveness of his techniques with the meekest pony in the audience as a "volunteer" -- and, naturally, that pony is Fluttershy. True to his word, Iron Will quickly gets Fluttershy to stand up for herself against his assistants, and she's pleasantly surprised at how good it feels to be assertive.

Back home, Fluttershy puts her lessons to good use, to the delight of her friends. But it isn't long before "New Fluttershy" grows more and more aggressive, eventually lashing out at ponies for slights big, small, or imagined. Pinkie Pie and Rarity try to talk some sense into her, but New Fluttershy thinks they just want the push-over "Old Fluttershy" back. She lashes out at them with personal insults, then dismisses their interests as shallow and frivolous, driving them off in tears.

Finally ashamed at how monstrous she's become, Fluttershy boards up her house and hides inside, for fear of hurting anypony else ever again. Concerned about her, Pinkie Pie and Rarity come by, then try to coax her out by saying she doesn't have to be a bully to be assertive. Midway through their discussion, Iron Will and his crew show up as well, to collect Fluttershy's payment for the seminar. Frightened of what he might do to their friend, Rarity and Pinkie stall him, but Fluttershy accidentally gives herself away with a sneeze, whereupon Iron Will threatens to tear her door down if he doesn't get paid. Fluttershy finally comes out... and tells Iron Will that she refuses to pay. Calmly but firmly, she explains that he had promised 100% satisfaction... and she's not satisfied with the seminar at all. Unable to argue with that, Iron Will agrees and leaves without a fuss.

As Pinkie Pie and Rarity celebrate the return of the Old Fluttershy, Fluttershy dictates a letter to Princess Celestia about how you don't have to change who you are to stand up for yourself. Of course, it helps that she uses "The Stare" on Angel to stop his fussy eating habits.

When somepony denies these tropes, you show them the ropes! (YMMV Tropes are here.)

Fluttershy: [finishing her rant to Pinkie and Rarity] ...when they are throwing their own lives away on pointless pursuits that nopony else gives a flying feather about!

Fluttershy: Iron Will is not a monster! HE'S A MINOTAUR!!! (sees her angry reflection in a puddle) I'm the monster...

Iron Will: No! When somepony tries to block, show them that YOU ROCK!

Fluttershy: You've got this, New Fluttershy! This day is yours, and nopony's going to take it away from you... am I RIGHT?!

Iron Will: When somepony tries to block, show them that YOU ROCK!
Iron Will: Never apologize when you can criticize!

Pinkie: Fashion is her passion.