My Suit Is Also Super 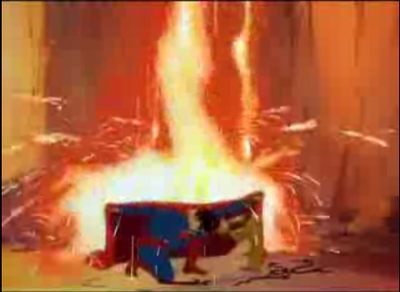 When Fireballs go flying around, you normally expect a certain amount of equipment loss. The same goes to when you hand a screwdriver to your average super-strong individual, or ask a human flamethrower to aim a gun.

These don't tend to end as badly as expected, though. Whatever strange mutations, unlimited cosmic powers, or Applied Phlebotinum stops the hero or villain from turning themselves into a deep-fried crispy critter instantly passes onto any clothing, weapons or Plot Coupon that he, she or it may pick up—unless, of course, the lack of protection is a plot point.

Furthermore, a character's super-strength provides its full benefit, regardless of size issues with the items they use with it. Additional strength simply results in an even-harder hit. Never mind that most weapons and so on aren't designed for people who can strike with earth-shattering force.

Even mundane huge objects picked up by Super Heroes generally don't shatter and bend like would realistically happen—the hero may have vast strength, but the area to which they could direct that strength is relatively small. (Witness Superman picking a car up by the bumper—by rights it ought to tear off in his hands, leaving the car right where it was!)

Often handwaved by explaining that the hero's gear is magical or otherwise of sufficient durability and strength for them to gain the equivalent benefit.

Of course, this does not apply if the suit is supposed to be super-powered, and is what gives the character their powers in the first place.

Contrast with Does Not Know His Own Strength, where the hero tends to forget that not everything is as super as them. See also Required Secondary Powers. Also contrast Clothing Damage, when the inability of the (usually female) hero's equipment to survive disintegration leads to Fan Service.

Examples of My Suit Is Also Super include:

Handwaved as a Subset of Powers

Handwaved as a Super Suit

Retrieved from "https://allthetropes.org/w/index.php?title=My_Suit_Is_Also_Super&oldid=1867272"
Categories:
Cookies help us deliver our services. By using our services, you agree to our use of cookies.