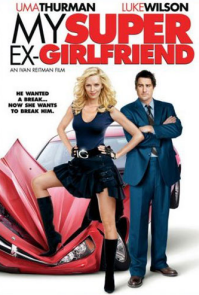 A film from the director of Ghostbusters starring Uma Thurman and Luke Wilson. The latter plays Matt Saunders; your basic everyman, who unwittingly ends up dating Superheroine G-Girl's alter ego. He finds out her secret, but soon also discovers that she's a Clingy Jealous Girl and breaks up with her for being controlling and dangerous.

She doesn't take it very well. Meanwhile, her nemesis hatches a plan to use this domestic dispute to depower her, and enlists Matt to spring the trap.

Tropes used in My Super Ex-Girlfriend include:
Retrieved from "https://allthetropes.org/w/index.php?title=My_Super_Ex-Girlfriend&oldid=1954326"
Categories:
Cookies help us deliver our services. By using our services, you agree to our use of cookies.