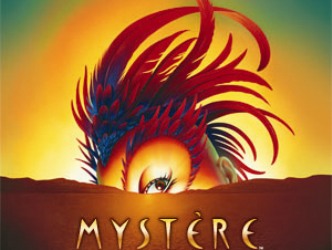 The viewpoint characters are two babies (played by adults) -- one male, one female—each of whom has a "lovey". For him, it is a red ball almost as big as he; for her, it is a toy snail on wheels and a string. Not long after the show begins, each loses their lovey, and off they go into the wide, strange world to find them again. The acrobatic acts that follow represent its wonders: noble angels, silly viruses, whimsical birds, etc. The pompous emcee Moha-Samedi more or less keeps order amongst the creatures, but he may meet his match with Brian Le Petit, who isn't one of them and has an appetite for mischief all his own...

While Treasure Island's then-owner Steve Wynn was shocked and unsure of the show's prospects when it was first previewed to him, so different was it from traditional Las Vegas entertainment of the time, it would find a large, appreciative audience. Time magazine's theater critic declared it one of the best shows of 1994. Its popularity and acclaim set the stage for the company's even more spectacular "O" at Wynn's Bellagio in 1998, and another five shows after that for Vegas. Mystere still endures as the "purest" of the Vegas Cirque shows—it's the closest analogue to their tours—and its current contract with the hotel isn't set to expire until 2016.

In Knocked Up, this is the show the guys check out on their trip to Vegas. It has also been credited as an inspiration for the video game NiGHTS Into Dreams.

As yet,[when?] this show hasn't been filmed, due to its host casino wanting to protect its investment. Several acts, characters, and performers did appear in the 2000 IMAX short Journey of Man and the 2003 Variety Show / Widget Series Solstrom. The 2007 documentary The Mystery of Mystere, available via Cirque's online boutique and show gift shops, includes a goodly deal of show footage, albeit with some spoilers for the comedy acts.

Tropes used in Mystere include:
Retrieved from "https://allthetropes.org/w/index.php?title=Mystere&oldid=1811569"
Categories: