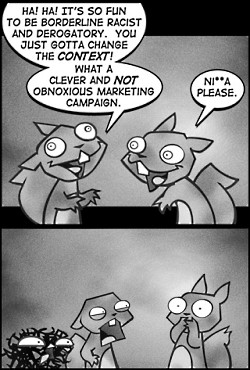 Even Parodies Have Standards.

Derogatory slurs are wrong. They are used as a way to imply that a whole group of people is inferior to another group in some way(s). Yet because words gain meaning from context, including the characteristics of the speaker saying those words, slurs are sometimes acceptable if they are spoken by people belonging to the group the slur is about. The most notable is the word "nigger/nigga." One of the most offensive words in the English language, it has become a term of fellowship in American hip-hop culture. Yet that fellowship only extends to those who have been accorded N-Word Privileges. Putting it simply, African Americans call each other this colloquially, generally when they are close friends; but if you address one of them with the word as a white individual, it can be an exceptionally effective method for getting yourself shot.

So who has N-Word Privileges?

Current rules appear to be as follows about most slurs:

Some of My Best Friends Are X will generally not work here.

Another aspect of this trope is when a person outside the group says a slur, is aware that it is wrong, or will soon accept that it is wrong, then later apologizes for it. Otherwise, it's just plain old prejudice. Thus when Draco Malfoy and Voldemort say "Mudblood" it doesn't count as this, because they never accept that it's wrong. This applies to bigots in Real Life, as well.

Many people (of all backgrounds) find this trope problematic. Those belonging to the non-dominant social group wonder if they can really "reclaim" a word with such a loaded history, or the point in doing so. Those belonging to the dominant social group cite hypocrisy and discrimination when privileges aren't extended to them (not that they'd ever use them, mind, but It's the Principle of the Thing). After all, assigning people different rights and responsibilities based on skin color is what got us into this mess in the first place, wasn't it?

The title of this trope comes from a comedian's explanation of why white people can't say the N word. "Maybe because we haven't always used it properly in the past. Yeah, we got a little bossy with it. Our N-word privileges have been revoked."

Also applies to the related words Negro, Negress and nigra, which are technically not hateful but are now closely associated with the "core" N-word. Sadly, and depending on the speaker / audience, may also apply to completely unrelated words, such as niggardly or black hole (examples below).

Also see T-Word Euphemism (which this page demonstrates), These Tropes Should Watch Their Language (vulgar words instead of hateful words).

Examples of N-Word Privileges include:

Retrieved from "https://allthetropes.org/w/index.php?title=N-Word_Privileges&oldid=1929476"
Categories:
Cookies help us deliver our services. By using our services, you agree to our use of cookies.