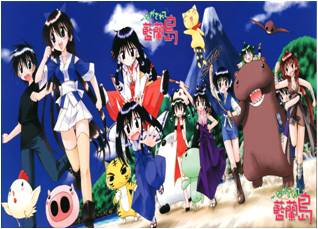 Ikuto Touhouin runs away from home after a fight with his father and boards a ship. After falling overboard during a huge storm, he washes ashore on a mysterious island inhabited by only women, with no escape. With a guy on the island at last, now everyone is determined to make him their husband.

The Character Page has just been started. Feel free to help.

Tropes used in Nagasarete Airantou include:

Mei Mei: No one under 18 allowed to see!

Michiru: Come on, calling me by a pet name; you still can't remember my real name?!

Ikuto: In the end...I still don't understand why Machi suddenly kissed me...

Karaage: Right now, the both of you really look like a married couple arguing over what to do with their son's education.

Ikuto: Just what kind of a monster is he?
Karaage: Who's the monster?

Ayane: Eh? The sunfish saw a tuna being chased by sharks while a human was riding on top of those very sharks?
Shinobu: As expected of Shishou. He, as always, gets involved in complicated situations that go beyond our imagination - degozaruna.

Kagami: Karaage-chan, who is the same age as you, already had his own family. But you-
Taka-Taka: Shut up! Living a single life is my principle!