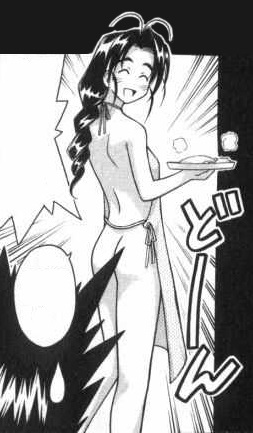 Well, that's a view of Mutsume we haven't seen before...

A trope in comedy, pornography and nearly any source of Fan Service, Naked Apron, frequently called "Hadaka Apron" due to its popularity in Japan, is the practice of wearing an apron over a scantily clad or outright nude body.

The trope's popularity comes originally from the pin-ups American soldiers brought with them during World War II; a common motif were titillating shots of women in otherwise normal domestic situations, such as cooking or cleaning. These pinups were emulated by Japanese artists around the same time Manga began to develop as an art form in the years after the occupation of Japan (1945-1960).

The appeal of the trope (outside of the obvious) is due to it allowing for the character to appear with modesty preserved from the front, but with a risqué surprise awaiting the viewer. In a somewhat meta sense, it is just as frequently used as a surprise for the audience as the characters viewing. Examples can be split between a character holding a perfectly casual conversation with another character who, upon turning around, reveals that they were in fact, nude; and the character being fully aware of it but the audience not seeing it until a certain panel—a Reveal Shot of a very revealing shot.

Frequently mixed with other such risqué Japanese tropes, such as bloomers and school swimsuits, or more generally, lingerie or a bikini (for when the character wants to pull this off, but is too modest). This trope is extremely popular amongst couples in Japan, as it is considered a traditional form of foreplay between newlyweds. As such, it comes up extremely often in Anime and Manga for Fan Service, especially in Harem Anime and Magical Girlfriend shows.

A traditional outfit of Ms. Fanservice and The Vamp when attempting to attract a more innocent target, or when attempting a more long term relationship. The Innocent Fanservice Girl also might end up dressed like this, because she doesn't understand you're supposed to wear something under an apron—in which case the viewer will have to explain it before any misunderstandings occur. The Shameless Fanservice Girl might choose to wear this, because it's technically required wear for cooking (splatters hurt), but has no qualms about how technically risqué the ensemble is.

All in all, a frequent source of nudity as comedy—often without actually showing any nudity!

Very similar in theory and practice to Theiss Titillation Theory; whereas Theiss's Titillation Theory states that the higher chance of a Wardrobe Malfunction causes an outfit to be sexier, a large portion of Hadaka Apron's appeal is the fact that it's a nude body that's "covered, but only technically", and any number of poses or gusts of wind would cause a Wardrobe Malfunction. The fact that almost all shots of Naked Apron are also examples of Vapor Wear (almost invariably due to Sideboob and "Sidehip" being shown) also adds to the Theiss Titillation Theory element.

Can also be worn by men, in which case it's usually played up either for laughs or for Ho Yay—sometimes both.

No real life examples, please; All The Tropes is not an eroge site.

Examples of Naked Apron include: