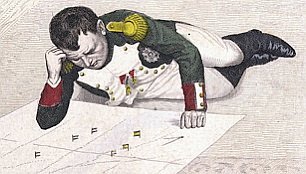 Napoleon studying a map. The most dangerous thing in the world.

The wars between Napoleon Bonaparte and various states in Europe in the early ninteenth century. Can be summed up as whoever France had conquered at the time vs. everybody else in Europe. The early years overlap somewhat with the French Revolution. Known before 1914 as "The Great War" before that conflict usurped the title.

The Wars of 1813-1815 are collectively known as the Wars of Liberation in Germany and Austria.

There were a number of wars going on concurrently that often interacted with the Napoleonic Wars proper:

These wars contain tropes such as:
Examples of Napoleonic Wars include: