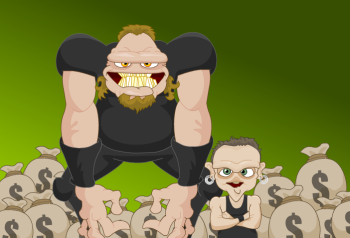 Off to save the music industry, one offensive Flash movie at a time.

A series of humorous Flash-animated shorts, produced in the years 2000-2001 by Bob Cesca from a group then known as Camp Chaos, satirizing Metallica and their MP3 sharing crackdown.

First, a little history. In 2000, Metallica sued the peer-to-peer service Napster, devoted specifically to sharing MP3 files, for having Metallica songs freely available on their network. The lawsuit ended up forcing Napster to ban hundreds of thousands of users, and eventually resulted in the Napster company going bankrupt.

The Napster Bad series caricatures Metallica--specifically, Lars Ulrich (mispronounced as ul-RICH) and James Hetfield--as a group of greedy primitives, upset about their fans giving them slightly smaller oodles of money than usual due to Napster. Other music celebrities, such as Dr Dre and Sheryl Crow, also get a lot of flak.

Understandably, these movies aren't very popular with most Metallica fans. And stay away if you don't like off-color humor, either.