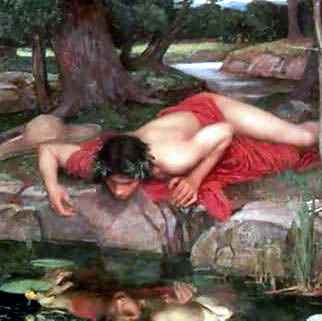 I told you not to disturb me.

Basically, one who has an abnormal fascination with oneself. A self-centered nature taken a bit too far. Often thinks of self as one of the Beautiful People, and to others often comes across as a Jerkass.

These people expect to be treated like a God in your life, which would fall apart if they weren't in it despite the fact they don't really do anything and possibly make things worse. Be very careful when calling these people out on it though. They've been known to use emotional manipulation to boost their enormous ego. Extreme versions believe that this world only exists to serve them and when praise isn't being given they can only view the world as a toy that isn't working properly instead of being filled with people who are simply acting in their own interests.

Narcissism is a personality trait theorized to be nature's defense against stress, anxiety, and depression, especially the kinds that are most likely to be suffered by people with Dependent and Avoidant personality disorders. Which it does by telling us to ignore the consequences of our actions. People who display constant, excessive narcissism are said to have narcissistic personality disorder.

Because stress, anxiety, and depression bring productivity down small amounts of narcissism help in the business world but too much narcissism causes people to procrastinate, become lazy, refuse to admit they made a mistake, become incapable of putting themselves in other people's shoes, turn into a Know-Nothing Know-It-All, or become a victim of Pride.

There is some controversy as to what type of childhood narcissists had. Some researches believe that narcissists were overvalued by their parents, while others think that they had a rather dismal childhood.

Some forms of narcissism employ black and white thinking called splitting as a central defense mechanism to stabilize their sense of self—viewing themselves as wholly good and those that would criticize or humiliate them as purely wicked or contemptible.

Premodern concepts include the ancient Greek Hubris which meant excessive Pride leading to or simply occuring before a fall. The contemporary view of narcissists is they're annoyingly unable to see this dynamic repeating itself in their lives, causing disorder on their own personality and others.

The Trope Namer is Narcissus of Greek Mythology. His story was first told by Ovid, which makes this Older Than Feudalism. The myth states that, after coldly turning down a beautiful woman named Echo (who was cursed to only repeat what was said around her, hence the name "Echo"), she prayed to the gods for Narcissus to experience unrequited love. Aphrodite answered this, making Narcissus fall in love with his own reflection in a lake. Due to never moving from the spot, Narcissus started to starve but fortunately a sympathetic God turned him into a flower(specifically a Narcissus flower which grows near lake beds), thus giving the story a Happy ending.

A common quality of an Alpha Bitch, My Beloved Smother, The Fighting Narcissist (duh) or a Stepford Smiler, though in the Smiler's case this trait functions more to protect the image of wholesomeness that is trying to be projected.

More likely to be into Selfcest than most others.

Compare Small Name, Big Ego, The Prima Donna, Spoiled Brat, Inferiority Superiority Complex, Black and White Insanity, Manipulative Bastard, and It's All About Me. Compare and contrast The Sociopath who combines the narcissist's self-centredness with impulsive behaviour and a total Lack of Empathy. See also Hollywood Personality Disorders.

No real life examples, please; this isn't a compliment.

Examples of Narcissist include:

Retrieved from "https://allthetropes.org/w/index.php?title=Narcissist&oldid=1942709"
Categories:
Cookies help us deliver our services. By using our services, you agree to our use of cookies.