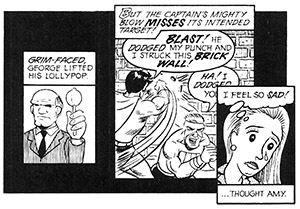 Distinct from As You Know in that everyone in the audience and the cast do, in fact, know this.

This is also seen in Reality Shows, when participant monologues are interspliced with clips of the events they are talking about:

Possibly a holdover from the days of radio, where it was necessary for characters to describe the action for the audience. The radio play (and subsequent versions) of The Hitchhiker's Guide to the Galaxy played with (and Lampshaded) this by using Arthur's tendency for this kind of talk to demonstrate the primitiveness of the human mind.

Perhaps writers do this because they assume that Viewers Are Goldfish.

Examples of Narrating the Obvious include:

Retrieved from "https://allthetropes.org/w/index.php?title=Narrating_the_Obvious&oldid=1258338"
Categories:
Cookies help us deliver our services. By using our services, you agree to our use of cookies.