Everything About Fiction You Never Wanted to Know.
< Naruto
Jump to navigation Jump to search 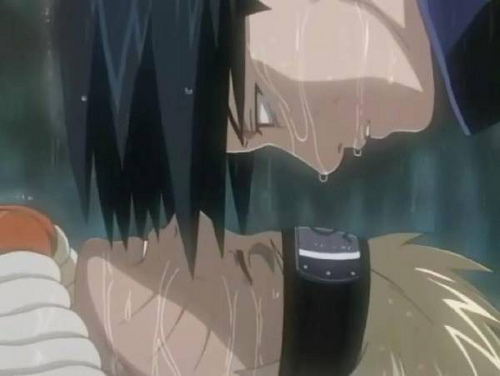 And the yaoi fangirls went wild. Thanks anime team.
Tropes used in Naruto/Ho Yay include:

Naruto and his rivals, friends, enemies

Shikamaru and Asuma. Hidan kills Shikamaru's sensei Asuma. This provokes Shikamaru to chase down and engage Hidan, an immortal, in battle and he defeats him by blowing his body to pieces and burying him alive.

Shikamaru and Kiba. When they interact in the anime there are heavy amounts of Red Oni, Blue Oni and the Smart Guy with the Idiot Hero.

• In Konoha Gakuen Den the girls discuss the "secret relationship between Sasuke and Akatsuki member Itachi" and even say "How naughty!"

• Itachi tends to have NoSenseOfPersonalSpace around Sasuke. • In the fight of brothers vs Kabuto, Sasuke gets a big angry and jealous that Itachi went so far as to use Izanami on Kabuto to get him over his obsession with becoming Orochimaru.

• In chapter 589 Sasuke tells Itachi "When I'm with you I remember the past. The feelings from my childhood spent together with the brother I loved." ◦ In chapter 590 we have Itachi's final words to Sasuke as he presses their foreheads together and looks deep into his eyes with a loving gaze and smile. "You don't have to forgive me. No matter what you decide to do from now on, I will love you forever."

Sakura and Her Rivals, Friends

• Many people had found Madara and Hashirama's "friendship" to be much like a Romeo and Juliet relationship.