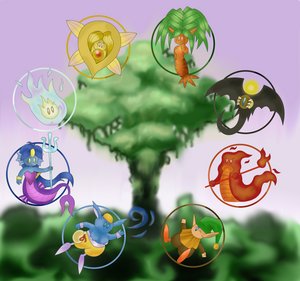 The Nature Spirit is a mythical being with a direct tie to nature. This includes your standard fairies, sprites, imps, dryads, nymphs, and occasionally even deities. Usually found in Ghibli Hills, and they may be a type of Genius Loci if they're tied to a specific places (frequently a valley or a forest, though dryads are traditionally connected to a particular tree and naïads are tied to a specific body of water).

The exact origin and motivation of the Nature Spirit varies widely. One may be kind and gentle Spirit Advisor living in peace and harmony, or it may be dangerous, uncompromising Knight Templar determined to defend nature against man because Humans Are Bastards. The most extreme example of the latter results in Gaia's Vengeance. They may also be very old, to the point of being a Time Abyss, to emphasize how insignificant human affairs are.

For the human version, see Nature Hero. Mix the Nature Spirit with Anthropomorphic Personification and you get Mother Earth. Occasionally, a virtuous and nature-loving human may be promoted to a Nature Spirit upon death, or when the plot demands it. If there's non-nature spirits for other natural forces, they can make up the Magical Underpinnings of Reality.

This is Older Than Dirt; any of the oldest human myths feature magical beings with a direct tie to nature, such as several cosmic and riverine Egyptian gods.

Examples of Nature Spirit include:

Retrieved from "https://allthetropes.org/w/index.php?title=Nature_Spirit&oldid=1823789"
Categories:
Cookies help us deliver our services. By using our services, you agree to our use of cookies.